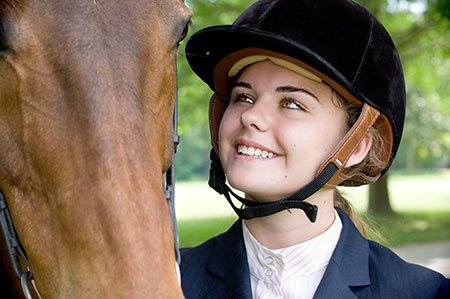 Almost 12 months later, we still pinch ourselves. We remain awestruck. And our gratitude to board members, volunteers, staff and community contributors is boundless. Why? Because our community helped us save the farm.

Saving the Farm
Last year — just about a year ago — CORRAL was at a crossroads. We were given the opportunity to buy the 10 acres we had been renting since 2008. Once we owned the land we would be able to help even more girls. And to own the land, we needed to raise $1 million. So we did, and we saved the farm.

In October 2015, we gave ourselves 10 months to raise the million dollars. A mere three months later, we exceeded that goal by just over 2%, or $22,613. We raised an average of $10,000 per day. As exciting, 860 of you donated, 595 of whom were new donors. All miraculous. All incredible. All possible with the support of our community.

Annual financial highlights
Last year, our fundraising successes were not limited to our Million Dollar Miracle. Our giving increased by 243%; more than 1,000 supporters contributed to our operations with 693 of those first-time givers. And 100% of our board and staff members provided a financial contribution.

Back to the books
On the subject of girls, as we write school’s back in session and we’ve welcomed a new group of girls http://www.corralriding.org/our-girls/. Thus our attention turns to them, our inspiration.

Our Girls, Our Volunteers: Hundreds of Reasons to Celebrate
You Spoke, We Listened, We Are Acting

How CORRAL changed me

How CORRAL changed me

Equine Manager and Animal Communicator Dakota Getrouw found her dream job when she...

Building Developmental Relationships With Our Youth

Building Developmental Relationships With Our Youth

In our work with our girls, we focus on transformational life change. This requires...

Don't miss out on our events this month: find out more here!